Saint Brendan the Navigator was a 6th century Irish priest that voyaged through much of Ireland and the North Atlantic spreading the Gospel. It is even believed that he made landfall on North America. His many adventures with his rag-tag following of sailor priest/monks brought him the status of "patron saint of seafarers, sailors and mariners." Since there is no officially designated "patron saint of scuba divers," our company has unofficially designated him as such and adopted him as our business name. His spirit of adventure in exploring the seas and spreading the "Good News" is summed up in this prayer honoring Saint Brendan:

God of sea and land, you endowed your servant Brendan with a bold and adventurous spirit, to occupy himself for your business on the great waters, and revealed to him your wonders in the deep. Make us, who recall with thanksgiving his life and ministry, zealous to be pioneers and pilgrims for the faith of Christ. Through Jesus Christ our Lord, Amen. 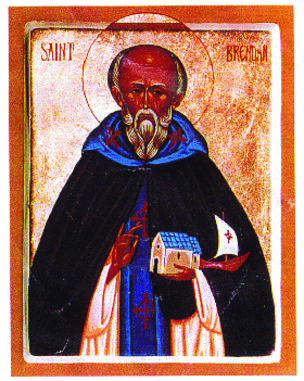